menu
About me Project music
Poggy

SINGER SONGWRITER
Poggy’s voice is like a raw element calling you back to the wild. Kent based singer songwriter and musician Poggy grew up in a family of 6 on the Kent coastal town of Deal.Music filled the house during these early years and it was through playing, singing and harmonising with her 4 sisters that her musical foundation was cast.Poggy’s debut album mixes elements of jazz, world and folk to create a kaleidoscopic journey through song. ‘Woman’ is the title of her debut album, recorded and produced by Richard Bundy (Sugababes, Marlon Roudette) and mastered by Ben Allen (Basheba, FyFe). Woman features 11 songs which tell of family bonds, interconnectedness and freedom. This is vibrant, fresh and contemporary music. Poggy is about to release new new ep 'No more I' in June 2021. 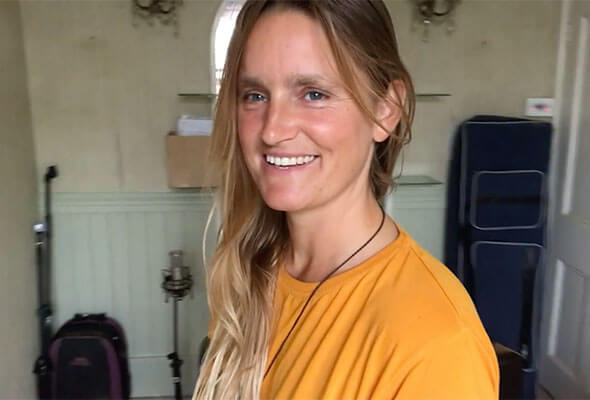 There must be a better way
Play

This song is about finding a better way to be, having explored all the 'dead end roads' in ones life. Its about finding peace and meaning out of chaos and suffering, and learning from our mistakes, paving the way for more compassionate and intuitive choices for ourselves and the world. The overall feeling the song emenates is one of over riding peace and harmony, elevating the listener above undertones of conflict and chaos, which are surrendering and unravelling beneath the surface, revealing unity, This song is an appeal to the heart.

This is a piece of art for the Earth and a statement of our readiness to save our dear Planet. The song has a native appeal of Afro-Cuban rhythm fused with Pop/Dance and Folk style drama. Initiated by myself (Collekta), I intimated Marshall-Muze about it and the soul in the music. To achieve depth, the project needed a female touch what it received by the vocal of Poggy and the poetic consciousness of Akwasi Marley. A gentle reminder that there's no Planet B for humans. We can only Save The World if we do it together!