menu
About me Project music
Tamar&Netanel

The music of Tamar&Netanel is all about emotion. Since 2013, the Jerusalem Mountain Folk Duo contributes its special touch with songs from and to the heart. Tamar (vocals, violin, guitar) and Netanel (vocals, Irish whistle, guitar) grew up in Jerusalem, but met through music, in Tamar's solo concert, and since then they create music as husband and wife.

Each of them came from different direction (She studied at the Academy, he played songs alone in his room), but this, together with their stunning vocal harmonies, is exactly what caught the heart of thousands of people, their fans in Israel and abroad. The simple melodies, alongside stories about life, love and nature, are wrapped with Jerusalem mountains atmosphere.

They already released two studio albums independently, and have performed in the finest festivals all across Israel, and also in New York And Boston. 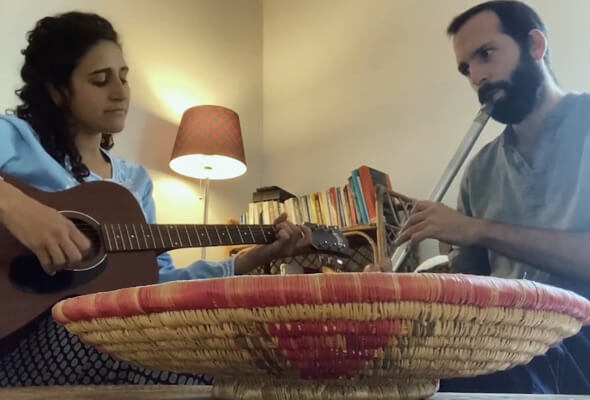 After the Rain
Play

This Hebrew song, written and composed by Tamar&Netanel, talks about nature's cycle and its important connection to our soul. Soema Montenegro's stunning vocals in Spanish and Guaraní (indigenous language of her ancestors) gives the piece its warmth and mystic sound of nature's ancient motherhood, Moshe Elmakias on keyboard and Tamar&Netanel's male-female vocals reflect the male and female forces in nature.

The song describes a dialogue between a flower and a drop of water on their journey to find each other. This micro perspective reflects the fragileness and uniqueness of each living organism on our planet - a thing we often tend to forget.

It takes a whole village to raise a child is what they say. Same could be said about this song. After Kate sent the lyrics and initial melody idea to Elly everbody that joined in helped build the song up to the warm, safe place it is now. And this is exactly what the world can be. A place where everbody helps build our grand home up to be the warm, safe place we all deserve.