Josh began playing the kora (a West African 21-stringed harp) when he was eight years old. First learning from his father, Adam Doughty, Josh soon developed a fascination for the instrument and would practice for hours on end, rewinding and replaying cassette tapes of kora masters and figuring out how to play along.

As a teenager, his exceptional talent was spotted by Malian kora legend Toumani Diabate, who invited Josh to visit him in Mali to deepen his learning. Josh made his first trip to Mali in 2007, aged 17, and since then he has made countless extended visits to Mali and the neighboring regions, embedding himself in the culture and traditions of West Africa. In this time, Toumani has become Josh’s teacher, mentor and friend.

Over the past decade, Josh has collaborated with a number of leading musicians from Africa and Europe, including Sampha on his Mercury Prize winning album, Process. He has played at prestigious venues including the Royal Albert Hall, St James’ P 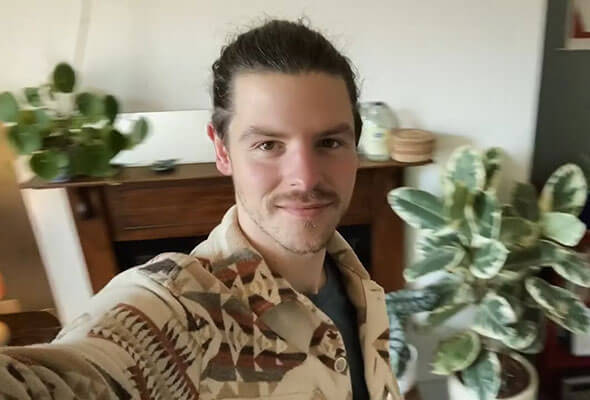 Finding The Light is a piece written by Simmy Singh that has been enhanced by the beguiling voice of Ali Asaad and the enchanting Kora of Josh Doughty, an unlikely but beautiful collaboration of sounds and worlds. The piece is about always searching for the light that lives in every one of us. Whether in conflict with ourselves or each other, remembering to honour that shining light that burns bright in us all can lead us towards authenticity, forgiveness, love and hope.

It is a text and a composition written by Ali Asaad. Ali used his Syrian Levantine Arabic dialect writing the text, utilizing a blended approach of genres in the composition, ranging from arabic maqam singing techniques to scatting, and a wide range of influences by electronic music, all along with contributions by Simmy’s violin and Josh’s Kora that flow with texture of the work. “Wine” designates the thrill that is reached by using the spiritual drink historically in the levant by literati, in kind of sessions or rituals.

Three unlikely artists come together from across the globe to create this online collaboration of Syrian Vocal, violin and Kora! the origin of this piece started as a creation by Josh doughty on the kora, then Ali Asaad added his haunting vocal and then came the beautiful moving strings by Simmy Singh. altogether it creates a moving unknowing emotion, moving towards something exciting but yet scary, it could be battle or it could be freedom.

For me (eva) it was a dream come through to work with cello & kora. Matthieu Saglio (cello) and Josh Doughty (kora) were the first names that popped up on the Beyond platform when I search for these instruments. The collaboration went very smooth. One email/call and both cello and kora parts were a wrap. The demo is quite rough and could easily be shortened, changed and recorded in better quality. What’s clear is that we’re a match. The lyrics are all about dealing with conflicting opinions and dissonances in our lives.