Adam Bałdych
Violinist and composer. Since 2012 he has been associated with the prestigious ACT Music in Germany. Dubbed “a violin prodigy”, he started his career at the age of 14. He was promptly recognised as an innovator combining the achievements of classical music and the contemporary language of the violin with an improviser’s talent. In a short time, he created his own style, which became an inspiration for a new generation of improvising violinists.
He has presented his music at the most important jazz festivals and in prestigious concert halls, in countries such as: Poland, Germany, South Korea, China, Japan, the United States, Canada, Austria, Iceland, Portugal, Azerbaijan, the Netherlands, Sweden, Norway, Finland, Italy, Spain, and Indonesia. He has performed and recorded with extraordinary artists such as: Yaron Herman, Helge Lien, Aaron Parks, Lars Danielsson, Nils Landgren, Iiro Rantala, Marius Neset, Jacob Karlzon, Joachim Kuhn, and Billy Cobham. 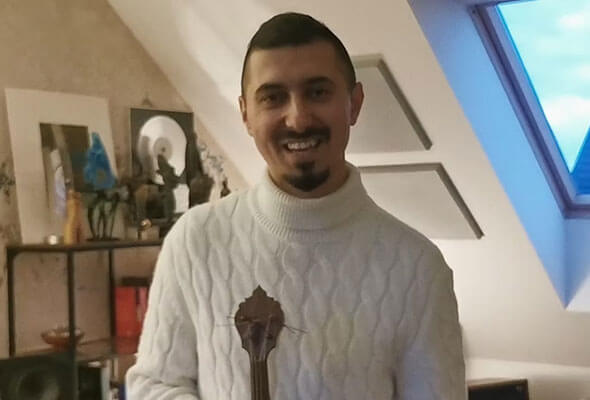 This is a piece based on melody from IV String Quartet ( Lento) by Polish - Jewish classical composer Szymon Laks (1901 - 1983), who survived two concentration caps during II World War. I decided to invite 4 extraordinary artists from Poland, Germany, Israel and Russia who represent not only countries involved in conflict of II World War in Poland but who blends classical music and improvisation. I tried to make miusic which unites artists and music genres, using rare renaissance violin as lead with vocal,piano, clarinet, drums and electronics.