Vishnu R is a guitarist, composer, inventor and patent-holder of Navtar ®, a revolutionary 9 string instrument that highlights micro-nuances of Carnatic melody and Western harmony. His superlative command over Indian Classical and Western Classical and Jazz music have gained him international acclaim, with performances and workshops across India, Europe and USA.

Vishnu, a Grade 8 distinction holder from the Trinity College of London, is the recipient of prestigious awards such as Karnataka Rajyotsava Yuva Prashisthti, Pogo Amazing Musician award and is a Fellow of the US Govt. Bureau of Education and Cultural affairs 'OneBeat' program. 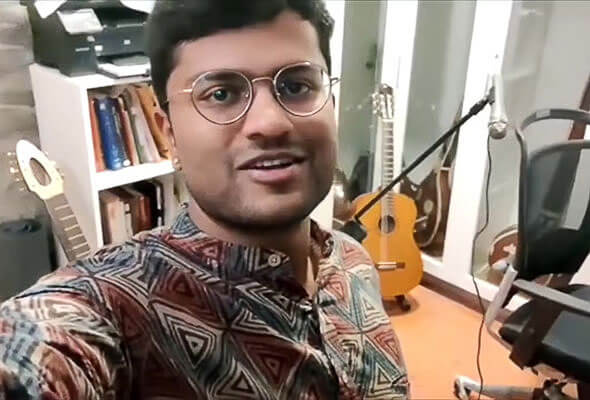 Life is conflict in motion. Beneath all the layers & masks we are One. Paradox is full of musical surprises: consonance-dissonance, poly-rhythms, staccato-legato, masculine-feminine & sonic expectation vs reality. Based in the Indian Raga Kiravani this song is in a rare & challenging 18/8 time signature, exploring interesting cross-beat subdivisions of 18, 9, 6, 4.5 & 3. Inverted harmonies, mirror phrases & themes, creative combo of cultures, instruments & textures are the highlight. Yet, beneath all the layers, this song is enjoyable & groovy!

‘Moksha’ in Indian philosophy is the ultimate liberation from conflicts. To me this song is born out of a musical and spiritual conflict. As a guitarist with deep love for both traditional Indian and Western music, I’ve had to earn my freedom a) physically & musically in mastering multiple genres through instrument innovation, and b) socially & emotionally, breaking free of opinion and expectations of purists and traditionalists and carving my own path. ‘Moksha’ is my voice of liberation and ultimately a song that transcends musical boundaries.

“The Big Picture” is inspired by the feeling when, in the midst of a raging conflict, you suddenly catch a glimpse of the bigger picture. At that moment, everything falls into place and starts to make sense. You realize how insignificant it is to hold on to the struggle. This song embodies the feeling of confidence and strength that comes over you when you suddenly know what you can do. Each of the four artists involved brings their own unique touch to this composition, creating a colorful blend of Jazz and classical Indian music.