I am a performing artist from Yaounde, Cameroon. I'm also a singer, composer and songwriter. My passion for music began when i was a child. Some great musicians like Angelic Kidjo,Alicia keys, Richard Bona, inspired my music career. This saw me doing back ups with a number of artists such as Emmanuel Djob from France, Queen Eteme from Cameroon, Grace Decca from Cameroon, Marya ade from Ivory Coast and Uche Agu from Nigeria.

I also participated in a number of music contests such as Les femmes et les filles forte (2013) and the MTN Make The Music in Cameroon (2014). I won a performance at the 2015 BET Awards in the US but unfortunately couldn't travel due to some issues in my country. i lately participated at the Afrimusic Song Contest (2017), the first and biggest music competition platform celebrating and recognizing talented songwriters and musicians from across the African Continent. Where i came out second.
I also participated in many concerts and festivals in my Country. 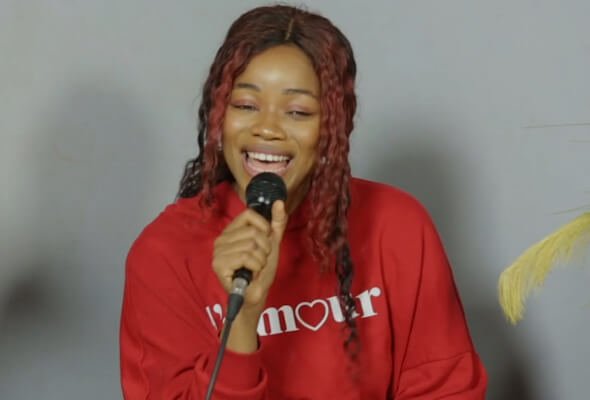 There is a quote by Brenda Shoshanna that says: "All conflict we experience in the world is a conflict within our own selves". This song is about inner conflict. An ongoing battle between one’s thoughts and emotions. As much as inner conflict is inevitable, dealing with it effectively is essential if we are to live up to our capabilities.

Among the most common conflicts current couples have, lack of realism stands out. In a couple, love isn't the answer to everything. The song “Outside in" is about conflict at a personal level, the internal conflict of deciding whether to stay or go in a relationship. Relationships are complicated, and no one knows for sure what the future holds. The best relationships have their issues, while the worst relationships still have their virtues. It’s hard to know what the best decision is if you’re thinking about whether to stay or move on.

Our world’s problems begin at a deep level, in our most personal relationships. Sometimes we are mired in conflict, but when we reach out to help each other everything can change. If we move up a level to the challenges we are facing in the world today such as war, hunger and climate change, we can also make a difference by being there for each other, even when the situations we have created aren’t very pretty. We are given a new chance to try every day when the sun rises.

the meeting of several countries and musical influences .. we approached the conflict under two aspects. Firstly musically through the different harmonic and rhythmic colors put together; to say that the result of a conflict isn't always discord or a war but sometimes something original can come out. In the lyrics Addressing the identity crisis conflict of the self forgetting who we truly are. We believe love's light shines brighter than the biggest star and has the power to drive all kinds of darkness which is the source of every conflict.

The song “Our world is blue” is a declaration of love to our blue planet. It describes the beauty of our world in wonderful colorful pictures and is nevertheless critical. This song should remind people of the unique but fragile beauty of our world and: The worlds impermanence. We´ll lose our blue planet, our only home, if we will not immediately begin to stop the environmental pollution and the climate change. The song was recorded with 15 musicians from all over the world. “Our world is blue, we never get another”

The sky and trees are the beauty of nature.It is the most intrinsic part of humanity. It is the art of God. Whether it's the morning sunrise or the moonlight in the night sky, everything roams around nature. Those who contemplate the beauty of the earth find reserves of strength to protect it. If you truly love nature, you will find a way to preserve it's beauty. As Carl Sagan said : We have to Preserve and Cherish the pale blue dot, as it's the only home we've ever known.

WHAT WILL THE EARTH BE IN A THOUSAND YEARS? Do you often think about the future of our planet? Try for a moment to imagine how our planet will be in 100 years, 500 years, or 1000 years? Will it be prettier or cleaner? Will our cities be greener? Or will there be no more vegetation in 1000 years? Will the Earth look like the moon, a desert or rather a landscape? If we consider the speed at which the nature deteriorates due to human activities, the worst could happen and this pretty blue planet could be completely destroyed.

"Only when the last tree has been cut down, the last fish been caught, and the last stream poisoned, will we realize we cannot eat money." Cree Indian quote

It's important to believe in love and sometimes we need a reminder of just how beautiful life is when we do love each other. This song tells us that no matter how the differences, or the distance between us, love holds us together. I sent a melody idea on a piano with mumbled words to which Ingrid wrote the lyrics. When she sent me the track, I was so moved. Hearing her sing so beautifully in French brought tears to my eyes. Her voice is powerful yet tender, and allows me to get lost in the song while feeling loved and safe.

Sometimes the pursuit of happiness is as simple as taking the first step, and sometimes you have to walk a lot further. What matters is that you keep going in the right direction! Our journey takes us up mountains, and we're not giving up. We keep on singing!

"Better Together" is a collaboration between two artists of completely different backgrounds, who connected both on an artistic, a musical and a human level. The song tries to break borders and merge musical styles such as EDM, Hip Hop and Pop. As well as this the song's message aims to address the breaking of borders on a human level, emphasizing a message of unity and crossing border together with lyrics such as "Together we can stand", "Together we are stronger" and "Together we can be better".

The theme of the song is love. The main song idea was proposed by Thesis Za. We decided to mix English and French with Xhosa a local South African language. This mixture brought a particular colour to the song. This song describes the happiness that we have for our first love. We want it to last forever. Love is a feeling so beautiful and strong that it transcends the difficult realities of a daily life.

Collaborating with the group Thesis Za was a real pleasure but it was also a real challenge to collaborate without ever meeting. We had to coordinate our studio sessions in order to share each part we were to record and check for the harmony of the song. I am really proud of the result. This blend of Cameroonian and South African culture on a song, it's amazing how it looks like we are singing in the same language and yet it is two different African languages, with these few words in English that come and embellish it all.