“Created to create, and forgiven to embrace.”

John Lumpkin II is a producer, arranger, and artists through the Jazz and Gospel scene. He obtained a Bachelor's Degree in Jazz Studies from the University of North Florida under the direction of Danny Gottlieb and Master's Degree from Florida State University under the leadership of Leon Anderson. John grew up in the pentecostal church and still plans to exercise his gifts there as well as other national venues. However, he says "The church is the root of my zeal for music and forever shall be". Throughout his career John has shared the stage with greats such as Rodney Whitaker, Delfeayo Marsalis, Wycliff Gordon, Marcus Roberts, Arturo Sandoval, Curtis Fuller, Marcus Printup, Houston Person, Rufus Reid, Ben Tucker, James Moody, Nathan Davis, and David Baker. 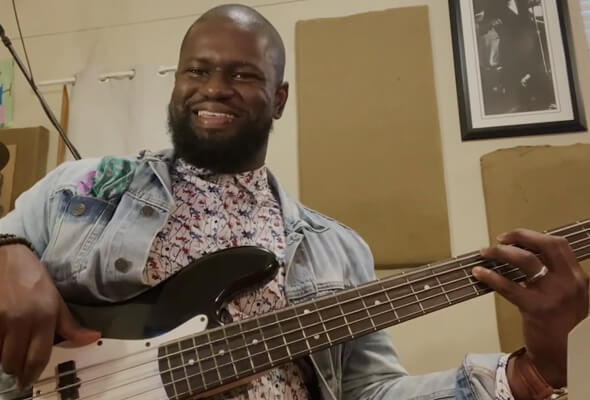 The conflict is born from the opposition between people or things, in music I believe that art is in finding the balance that is born from joining two or more different criteria. The conflict is the excuse to find a common point. In this time of isolation, being able to meet so many incredible musicians is a remedy within chaos. In this "Cueca" we seek to find that balance, where very different cultures coexist and converge in a single language, shaping the personality and imprint of each musician.

In this little instrumental song "the bouncer" by saxophonist Lorenz Hargassner we can see conflicts in between different musical styles of the world - and a solution. They are coming from different cultural backgrounds and manage to create a common language in their performance. Did you expect it worked? To throw in the Qyl Qobyz from Kazakhstan by Raushan Orazbayeva, the Pipa by Gao Hong, an electric bassist from Johannesburg, a classical trained vibraphone player from Berlin, a US gospel drummer and an australian remix-artist? Listen, enjoy!

In movies, novels and news, War, for lack of a better word is "exciting" if not romanticized. We tend to forget that real bones are broken, real people die, several families are separated, people become refugees, and several people's lives are scarred forever including innocent children Dyllann is an internally displaced person due to the war in Cameroon and as we wrote the song, the conflict between Israel (Anat's Country) and Palestine had just escalated. Image by David Mark from Pixabay

Out of place, confused, stumbling but keeping pace. Keeping moving without being able to see all the way ... without giving up.

The lyrics describes the struggle or conflict with our past and the internal process of "letting go" to embrace a new beginning.

The song deals with courage and fear conflicting within. There is an overcoming power within us and we must be still to have it find us. The sum of this song is captured in one lyric, "If life is to live then why to fear?"

MANTRA' is an offering to Mother Earth, who is the foundation of all things. It talks about human actions to be cultivated to protect the planet. We have many environmental issues, but in the current scenario, when the world is still struggling to combat Covid 19 with many human lives lost, what we all need to do is to adopt a holistic approach towards living life, a lifestyle that exists in synchronization with nature. Additional artists from Nandighosha Group: Bruno Steffen: Arrangement, Vivek Bhurtun: Tabla, Rätus Flisch: Double Bass.

We live on this beautiful planet, we breathe thanks to it. She generously gives us what we need. The song "The Time is Now" is about our relationship and our behavior towards it and our disconnection from each other. We now know that the resources are not limitless and it is time to reconnect. There are no better times than now. The Time is Now

This song was derived from something we all need. Love is the inner abundance, and like love air is the exterior abundance. It is present and available at all times in our waking and sleeping. While we breathe, let us also remember the inward air of love that reminds us of its presence...creating a circle of true life.

‘’Nature is full of meaning, filled with indescribable music. The trees, the stars and the blue hills ache with a meaning which can never be uttered in words’’ - Rabindranath Tagore. Here is how we would like to sum our feelings behind 'Shira': In Silence and Joy, I dance to the tune of yours, O Mother Earth, I exist because you exist, I do not know which language you speak, but I've sung many times in your embrace, You have spoken to me through your silence, All those traveled through me, became a melody, a song I sing in silence and joy.

Alpha, the mature son of his Mother Nature who was not Her first manifestation of Life, but the first to understand some of Mothers deepest mysteries. Universal Mother of all Life, who forgives everything to Her son, giving him everything he will need to live. Even a virus if so. Until the day when She herself needs Healing, for so many pains that She receives from this rational and intelligent son. Ours is the power to crystallize all Her beauty and health.

Randy: It's a poetic image using a metaphor of the world spinning around its axis. Like a dance and since, the planet's life is at risk, we decided to join pleading for mercy of life of the planet. And to continue by asking whatever thing is at risk that at least let it get one last dance. It's when you are left with no options and decide with whom to hold your life in his or her hands. Since I believe music uplifts the spirit so it seems only naturally when worse comes worse the world will go out by way of dancing to death.

Climate Change is an international concern, but the truth is that each community experiences it differently. Tropical regions that depend on agriculture, are having inconsistent rain and dry seasons which lead to low yields and on the other side of the globe ice is melting. All changes are frightening especially to local communities that don't have enough power. La Yo Yavsin Koy is an original African folk style fusion which calls for leaders and for humanity at large to not fold our arms towards the issues brought about by global warming.

This collaboration is centered around the Earth from a Mothers perspective. "If Mother Earth could talk to us as her children, what would she say?" The following generations depend on our fight to live together with nature and each other, not divided.

Another picture of the dramatic situation of our planet and our humanity that is missing somewhere. Starving children who die. Helpless cries call us. How many violence oppresses us. The indifferences that weigh on the conscience of many atrocities. And all the weapons they sell without any scruple. Unnecessary waste reflects all the serious mistakes of an old civilization. Contradictions chase us and the privileges that separate us. And we who stand by and watch…Who among us can still accept. What is the answer to give? So, what does it mean.”

Tell me captain it’s a grooving rhythm and blues that give “a lighthearted take on what's going on in the world” (Elly). We won’t accept, we won’t give up, we will “…keep on running against the wave, keep on singing in the rain, keep on loving life and human beings…” (Diego)

This piece is based on the conversation that we can have as a human race about the one thing we all want, true value through love.