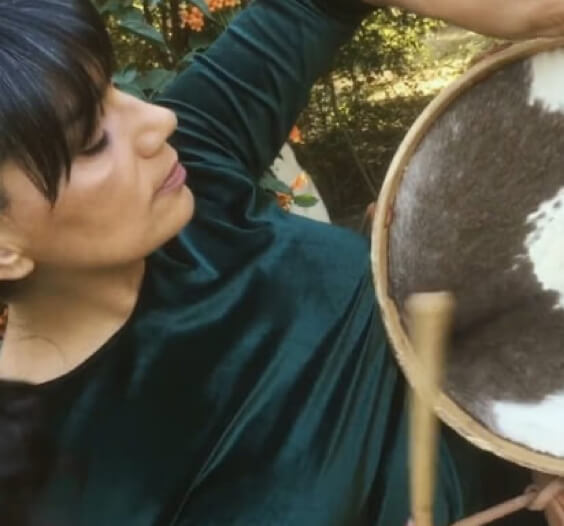 The song talks about the possibilities that we lose as a result of our own conflicts. It is a dialogue with that inner self that often generates doubt, instability, paralyzes us and does not allow us to relate and move fluidly in our lives.

"The Sun" is a dream of change; it is a request of brotherhood to the people. The Universe and humanity need the best of each other so we can improve our quality of life in harmony. Being the mirror of the other, we can achieve it.

This song has the most primary pulse, that of life and mother nature. It is an invitation to work from the personal in trying to generate from the energy those vibrations so necessary for the harmony of our life in communion with the universe. It is the invitation to that prayer so necessary in these times, prayer beyond religions.

The song 'Bhoomi' (Mother Earth) is a cry of her describing the pain caused by the insensitive usage of her resources by human beings. The suffering of the mother Earth is beyond imagination: pollution, deforestation, soil erosion, climate change, biodiversity loss; because of modern life style of human beings and due to their lack of consciousness. Since our survival is entirely dependent on the survival of the mother Earth we must need to take care and protect her. Additional musicians: Bruno Steffen (arrangement), Vivek Bhurtun (Tabla).

The Philosophy of the song is The whole world is one, all people are the same. We should happily coexist without fighting against each other in the name of Countries, religion, cast, color, rich and poor. We should live with Universal brotherhood for peace and prosperity of our planet.

Cybèle is a deity of Phrygian origin, adopted by the Greeks and Romans, personifying the wilderness. She is presented as "Magna Mater", Mother Goddess or Mother of the gods. She is one of the greatest goddesses in the Middle East. I learnt about Cybele while working with volunteers of Cybele Planete. One day I had the inspiration to make this song. Cybele in imagery rides a lion and reminds of the goddess Durga of Indian culture. I find her power impressive and the song has the feeling of people marching with her to the heart of Nature.

Calling humanity is an invitation to meditate on the importance of awareness of caring for our planet and respect for our ancestors. Different cultures vibrating together in the atmosphere of this song.

Very often, the human race marveled by its own intellect and strength tends to forget that we are one with the planet; and that we need diversity even for our own survival. Rise Again is a song of hope. it doesn't condemn but acknowledges that mankind has been wrong a lot of times in the past and that there is the opportunity to rise again as one with the planet.

Suddenly everything stopped in infinite silence. Humanity is on pause waiting for its destiny. It is time to make a decision, the wind hides his voice, and nobody hears the music of the spheres. We must be one again: Humanity and Mother Nature. Faith and hope in our sacred music. Faith and hope in our sacred humanity. Beyond our sacred Music, beyond love. This song was composed during the Covid quarantine with these amazing artists and people. Kazakhstan and its millennial voice, Amsterdam, Cuba and South America.

This Song is about looking at the positive aspects of life so we can move on and strive towards making the world a better place.

The soil of the Andean lands breaks, the waters of the world´s widest river stir in the South Atlantic, a typhoon wakes up in the Japanese archipielago and giant flames rise like burning tongues from the Korean peninsula. Earth - Water - Wind - Fire Four Elements, Four Artists. The Far East and the deepest Southwest in ask for mercy in “Sprout”, a prayer for our Mother Earth.

Meadow, Is a love letter to nature from humanity; The song expresses how we enjoy the benefits of nature, but also our regrets as our actions turn to endanger nature. The song is dedicated to all the animals and nature that have gone extinct because of human action. The song expresses our need and appreciation for biodiversity and says its time for us to look at the universe as a meadow for all biodiversity

Sasha: “SOY” (I am) is a romantic, Italian stylized song, where our relationship with our “mother earth” is presented as an interaction. To thrive you need to treat each other with care, love, attention and respect - it’s the only way to keep it alive … The absence of those above will, eventually, lead to disruption and disconnection, and finally - “death” of it. Mariana: This song is the voice of the earth in the first person, crying out to embrace it and give it a hope of change. Mother Earth feels without strength and needs to recover.

It is a song of hope written a day of extreme despair. Inspired by a hummingbird that seemed to be lifeless and when I approached and touched it, it took flight. It seemed to need someone's warmth or simply rested from his flight.

It's a song that talks about freedom, about that free spirit that we need to blossom and fulfill. Inspired by the Carnation of the air, a plant that grows suspended in the air and that blooms anywhere, without soil.