BIBIANE SADEY was born in Douala (Cameroon)
She is a singer, guitarist,composer and music producer.
Heir to a family of artists including Egide SADEY and Beko SADEY among others, she is interested from an early age in music and gets on a stage for the first time at the age of 5.
After forging her experience in cabarets, school concerts, choirs, she also performed the first parts and/or backing vocals for artists such as JACOB DESVARIEUX, TONY CHASSEUR, MANU DIBANGO, ETIENNE MBAPPE, ANDRE MANGA, GINO SITSON, HENRY DIKONGUE, GEORGES SEBA,DOBET GNAHORE,CHARLOTTE DIPANDA,SHAN'L,EKAMBI BRILLIANT, TOM YOM'S to name a few.
Though she performs on a variety of genres, she likes to see herself as an Ethnic Afro-Jazz musician.
She launched a maxi single of 3 titles on December 1, 2017.
The album, named "NYANGONDEDI" is a play on words composed of "Nyango" and "Ngondedi", meaning respectively "Madam" and "Mademoiselle" in Duala language 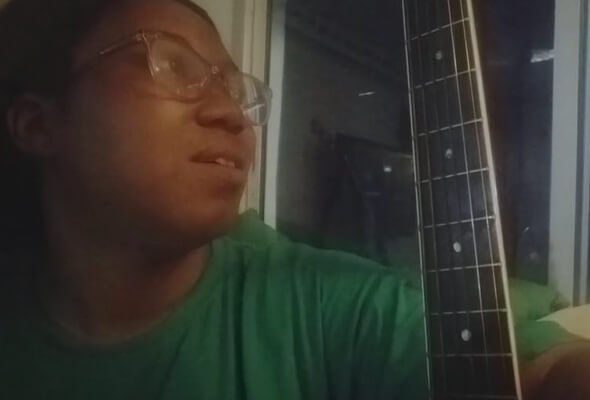 Inside my head
Play

The song is about the greatest and eternal conflict that every human being is called to face throughout his life : the one between his flesh and his spirit,the good and the bad. Note * Susana Orta decided to express the fact that each of us can live finding the perfect balance between both and she illustrated it presenting 3 principal natural and complementary elements from her native area. * Teriba in the song argued that the spirit must always be over the flesh in order to keep a good life

This song evokes the fact that everyday, human being is confronted with daily battles: to seek something to live, to preserve his health as much as possible, to protect his mind against the trials of life, in short, to live in eternal conflict with the blows of life in order to stay alive as long as possible.

the meeting of several countries and musical influences .. we approached the conflict under two aspects. Firstly musically through the different harmonic and rhythmic colors put together; to say that the result of a conflict isn't always discord or a war but sometimes something original can come out. In the lyrics Addressing the identity crisis conflict of the self forgetting who we truly are. We believe love's light shines brighter than the biggest star and has the power to drive all kinds of darkness which is the source of every conflict.

This song is a conversation between Mister Yes and Mister No, two opponents in endless rivalry. When one agrees, the other one disagrees, and vice versa. I tried to represent the argument in a musical and funny way while keeping the « conflict » as the theme. The song is sang in English and in Yezoum,my native language

"Sí ndôn" means "The planet" in Ewondo language from Cameroon.This song is a conversation between God and human being about how they feel to live in the planet and in return, they give thanks to God for he made the world and all its precious marvels.

"Minyôn ya sí" means "tears of the Earth" in Ewondo language from Cameroon.The song is about the planet asking human being why it is destroyed day after day and crying for protection,for good care.

Mundi mwa wasé in duala language from Cameroon means "Earth".This song is an ode to the physical beauty of the Earth and its components in order to realise how precious is our dear planet and that we should manage all our efforts to keep it as marvelous and wonderful as it is.