Jean louis MBE is a Cameroonian artist musician,He is a songwriter, performer,guitarist arranger and film actor.He baptized his musical genre"afro pop bantu"and he also makes the drunk pop that he links with African varieties.Lured by the music of icons such as: Ali farka toure,yousou ndour, salif keita, angelique kidjo, WeS MADIKO and MANU DIBANGO
In 2020 he was found on the side of the bali art market (BALAMA) French institute of douala. In 2019 he is the the only artist from central Africa to join the Italian catalog IICI-CONSULTING which is a catalog bringing together artists from Italy, Africa and the Middle East.in 2020,he won the Beyond music creativity prize alongside Conny Schneider (germany Senegal),ueli gasser (switzerland), bibiane sadey, francis mbe, ben bossambo (cameroon).In 2021 he is in concert at the French institute of Yaoundé under cover of the bastos music laboratory in partnership with the said institute And recording for the EARH CHOR KIDS project - GERMANY 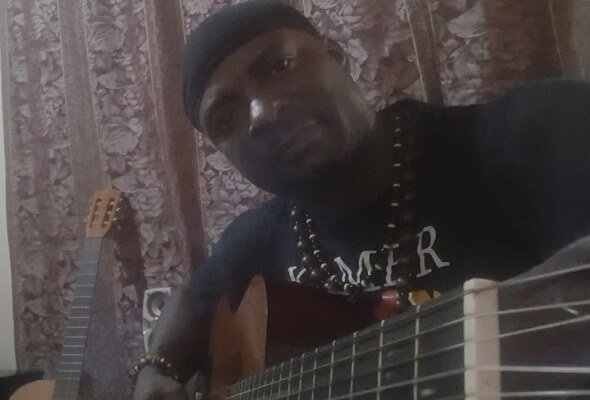 collateral damage is a semi-instrumental song that expresses the cry, the tears and the despair of children in times of war or when there is conflict between the Beligerents. a spiritual request, the cries of the tears of children, victims of wars and conflicts of all kinds in the world, which call for help. protect them from all these scourges. I am winking here at child soldiers and who are enlisted in the armed forces, only want to go to school to learn to be the future executives of tomorrow in our society.

the song is about the status of Jerusalem, this small part of land in the Middle East, disputed between Israelis and Palestinians so each claims to be the owner. This song is about an exortation to peace between the two aforementioned parties, the war and hatred not being a factor in the development of a society.

The song is a call of an eldest talking to his relatives: He talks about the necessity of living in harmony and peace in order to be productive and happy in our societies. We combined different musical influences and instruments from different musical backgrounds in order to show that living in peace concernes all inhabitants of our planet. We should always stay positive and - that is why we maintain a light mood throughout the song.

This song is a conversation between Mister Yes and Mister No, two opponents in endless rivalry. When one agrees, the other one disagrees, and vice versa. I tried to represent the argument in a musical and funny way while keeping the « conflict » as the theme. The song is sang in English and in Yezoum,my native language

Very often, the human race marveled by its own intellect and strength tends to forget that we are one with the planet; and that we need diversity even for our own survival. Rise Again is a song of hope. it doesn't condemn but acknowledges that mankind has been wrong a lot of times in the past and that there is the opportunity to rise again as one with the planet.

This song is about hope. We surely have reason to think that this world is going to ruin. That there is no hope for us and for the next generations. But we must always remain positive. Each of us should do our part to make a difference. In this song, it's a mother (earth) talking to her children. she tells them everything will be fine. She tells them that there is no reason to be afraid because the good that we want for the world is within us. If we have the strength to go deep down, we can change the world, make it better

"Sí ndôn" means "The planet" in Ewondo language from Cameroon.This song is a conversation between God and human being about how they feel to live in the planet and in return, they give thanks to God for he made the world and all its precious marvels.

"Minyôn ya sí" means "tears of the Earth" in Ewondo language from Cameroon.The song is about the planet asking human being why it is destroyed day after day and crying for protection,for good care.

‘Jamm Borom’ which means ‘plenty of peace’ in Wolof, one of Senegal’s native languages, unites five musicians from Cameroon, Senegal and Germany. In the song Nature is talking to us humans, asking why we treat her so badly, destroying everything she creates. The project mixes musical influences from these countries and builds a bridge between nature’s beauty and abundance and her overdue exclamation urging us to change our style of life.