I was born on 30.11.1987 in Lattakia, Syria. On 2009 I moved from Syria to Turkey to study in Ankara State Conservatory – classical guitar department, Hacettepe University in Turkey. On 2013, I got internship in Paganini Conservatorio in Genoa, Italy for writing my own composition for classical guitar and string quartet. Between 2013 – 2015 scholarship to study in Karl-Franzens University, co-enrollment in Graz University of Music, Austria. Now I am continuing my master studies in University of Vienna in Musicology department, concerned with research issues in Ethnomusicology and Acoustics.
As a classical guitarist, singer and composer: I have been giving concerts constantly in Syria, Turkey, Italy, France, Austria, Germany, Holland, Luxembourg, through various invitations for performing my own project and many other collaborations (such with Dima Orsho, Manfred Leuchter, Hassan Ali..et al.). I have recorded 3 albums of my own compositions on 2014, 2017 and 2019. 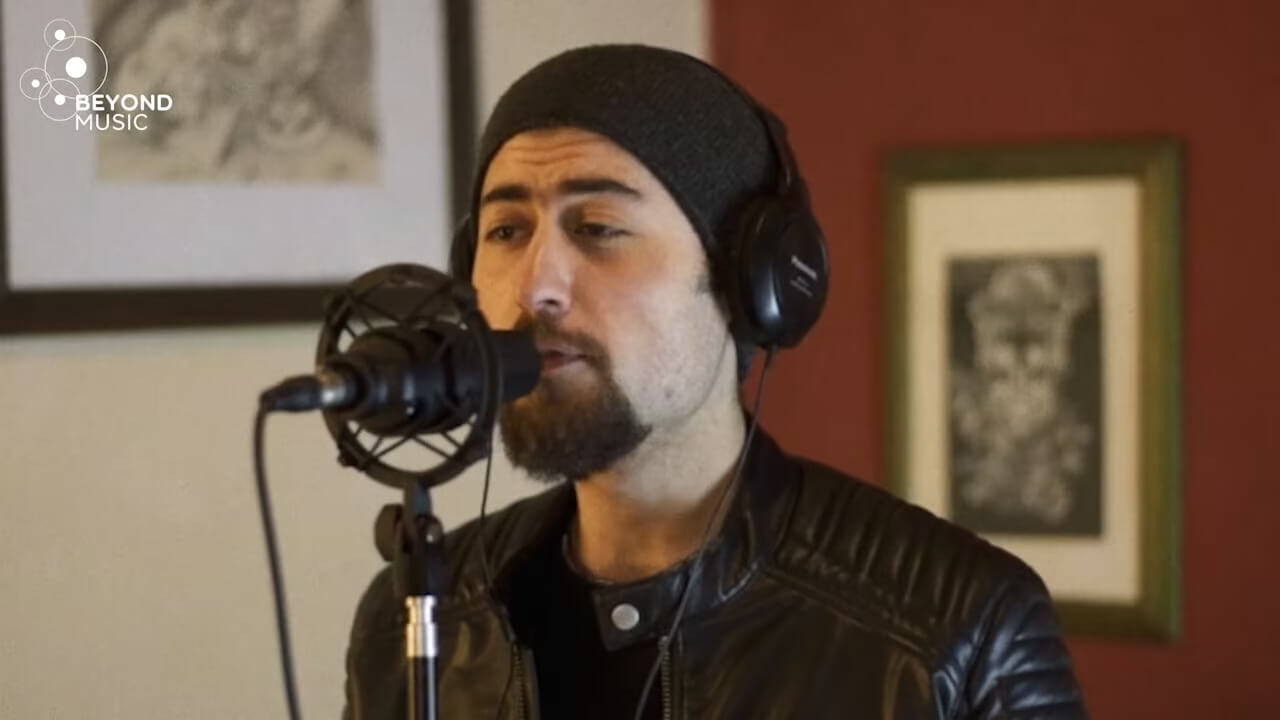 Finding The Light is a piece written by Simmy Singh that has been enhanced by the beguiling voice of Ali Asaad and the enchanting Kora of Josh Doughty, an unlikely but beautiful collaboration of sounds and worlds. The piece is about always searching for the light that lives in every one of us. Whether in conflict with ourselves or each other, remembering to honour that shining light that burns bright in us all can lead us towards authenticity, forgiveness, love and hope.

It is a text and a composition written by Ali Asaad. Ali used his Syrian Levantine Arabic dialect writing the text, utilizing a blended approach of genres in the composition, ranging from arabic maqam singing techniques to scatting, and a wide range of influences by electronic music, all along with contributions by Simmy’s violin and Josh’s Kora that flow with texture of the work. “Wine” designates the thrill that is reached by using the spiritual drink historically in the levant by literati, in kind of sessions or rituals.

Three unlikely artists come together from across the globe to create this online collaboration of Syrian Vocal, violin and Kora! the origin of this piece started as a creation by Josh doughty on the kora, then Ali Asaad added his haunting vocal and then came the beautiful moving strings by Simmy Singh. altogether it creates a moving unknowing emotion, moving towards something exciting but yet scary, it could be battle or it could be freedom.

The piece "La 'Allam" is a Love Song composed by Ali Asaad. It is a piece of Ali's current work on new Syrian Songs, which is built on intimate spoken contemporary Syrian poetry (poet Hani Nadeem) with various dialects of Syrian-Levantine Arabic. The new identity is reflected musically by collaborating with arranger Sasha Shlain and Swiss Saxophonist Thomi Geiger, trying to bring the Syrian Pop Song into its new orbit, to confront new musical textures, effected by Jazz settings and electronics, targeting Syrians and Europeans.

The piece "Searching for the Pitch No.1" is built on Iraqi Folk Music / Religious Ritual Genre of Singing. It is being vocalized and recomposed by Ali Asaad (main chant and choir-like vocals). This track is a collaboration with the Russian Swiss-based composer Sasha (Alexander) Shlain and also with the Swiss composer and multi wind-instrumentalist Sandro Friedrich. The track includes Sasha Shalin's collaboration as arranger in the electronic accompaniment, as well as the own-improvised recorded solo of Duduk played by Sandro.

The piece "Giresun" is built on Turkish Folk Music from the Black Sea of Turkey. It reflects Ali Asaad's various influences including Turkish rich musical culture and language, as he studied in Ankara State Conservatory before studying in Austria. It is being vocalized by Ali Asaad (main chant and choir-like vocals). This uploaded track is a collaboration with composer Sasha (Alexander) Shlain who I have met on the Beyond Music platform. The track includes Sasha's collaboration as arranger in the electronic accompaniment.