SinaUbi Zawose(01.02.1995) was born in a musical dynasty of the Zawose family that was representing Tanzania through Gogo traditional music all over the world. SinaUbi Zawose learned music as a traditional dancer and drum player at the age of 10 under the supervision of the internationally known Dr. Hukwe Ubi Zawose.
After his tutor died, SinaUbi continued playing music: In 2008 he released his first album called WICHIMAJEon traditional music based on the nature and language of Gogo traditions. Together with his sisters and brothers he created an unique album conserving the musical roots of the family Zawose.
In 2014 he started his studies at the TaSuBa/Bagamoyo. In 2019 he was among the 5000 contenders/artists of EAST AFRICA GOT TALENT in Nairobi/Kenya. It was a great success for SinaUbi to reach semi-final. Being among the top ten he made history by being the first artist from Tanzania to play traditional music by using traditional instruments like Zeze to perform live on stage. 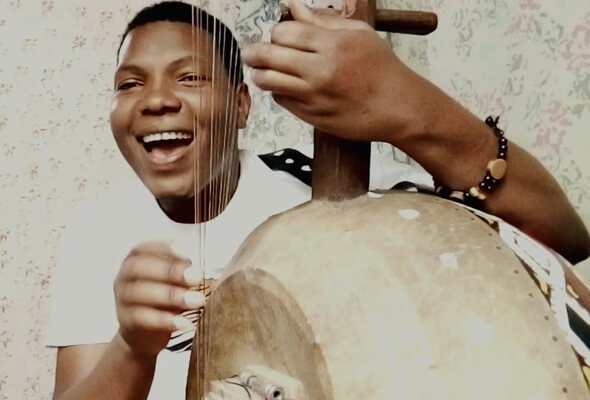 Conflict between family and friends is sometimes caused by unnecessary circumstances. We are better off building each other. Pay less attention to the negative talk and focus more on positive thoughts, talk and gestures

NJAA is a prog-African opus about hunger and famine, the global crisis that still plagues humanity despite all of our material gains. Bringing together powerful voices from East and West Africa (singing in Swahili and Fon), NJAA compels us all to confront the suffering as if it were your own family. Are you immune to starvation?

There comes a time, when conflict stares at you in the face. And your only choice is to look it straight in the face and call it by its name. You are stressed, you are scared, but you have to beat it. Photo by Gift Habeshaw from Unsplash

Sadly Corona is traveling our planet and it can make us ill and even kill us. At the same time, while 'normal' life is paused the planet is regenerating, the sky and waters are cleaner than before. With this song we aim to warn against this virus as well as point out it is an opportunity to find new ways to reconnect with each other and the planet.

When high energies from East Africa come together, prepare to get uplifted to a higher frequency. Niza Simukonda from ZAMBIA dropped some slick vocals, Sinaubi from TANZANIA added a chorus, verse and some hallucinating sounds with his kalimba. Masta Luminary from Kenya sound engineered and made the beat fusing African instruments like Nyatiti, Ngoni and Hotchiku Japanese flute blended with sweet percussions enough to take you to a whole new world. Enjoy

Sina Ubi composed this song expressing the concern for the new generations of Tanzania, who are increasingly lost in their inner path, becoming dependent on drugs. The lack of self-esteem and emotional health in such young generations has become a global scourge for a long time now. It is here that we move away from our roots and our life mission. There is an urgent need for a manifestation in favor of Life with self-love. A Manifesto sung with one voice that will restore healthy conscience to every human being. Our Mother Earth! A global call!

It is time to let go of the last lament. And let it sound in unison, human and animal, from the top of the mountain, to the burned tropical forest, passing through all the plasticizing seas. Plasticized also proves to be the world economy driven by capitalism that does not reward equality in this so-called, Animal Kingdom. Plasticized is also humanity and all its extraordinary existence. It is time to redesign economic systems so that they really serve people and the planet. It was the Kyl Kobyz that ended up giving the title to the song.